Joanne C. Hillhouse is hard at work preparing for the launch of her new novel, Oh Gad! It goes on sale internationally on April 17. A native of Antigua & Barbuda, Joanne is the author of Dancing Nude in the Moonlight.and The Boy from Willow Bend. Well known in literary circles throughout the Caribbean, she’s an avid writer and an award-winning freelance journalist. She graciously took some time off her busy schedule to talk with me about her new book, her sources of inspiration as a writer and the work she does nurturing young aspiring authors in Antigua.

Oh Gad! goes on sale internationally from April 17. How has it been in the run-up to the launch?

Joanne: Well, we have a launch event scheduled for April 16th in Antigua. I’m looking forward to that. I held the book in my hands for the first time the other day and had a ‘how did I get here’ moment; and as I signed the copies ahead of the launch I found myself stopping from time to time to look at it or flip through it, hardly able to believe. I’m happy with the end result. But I am also overwhelmed and nervous as hell; though most days too busy, it’s been very busy, to focus on the nerves. 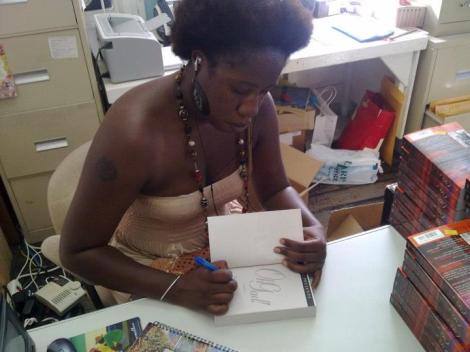 Joanne signs copies of Oh Gad! at Best of Books bookstore in Antigua in preparation for the launch

In an article in the online journal Antigua Stories you reminisce over the days when simple tasks like shelling peas, peeling carrots, and grating coconut used to be normal, everyday household chores for kids. Now you wonder aloud “how many of our kids know that pigeon peas grow on trees and not sealed in plastic on supermarket shelves?” You also lament the way that so little effort is made to preserve the memory of Antigua’s folk wisdom and the roots of the island’s cultural heritage. To what extent is Oh Gad! a product of those sentiments?

Joanne: Interesting that you should ask that because beyond the personal narrative of the main character Nikki in Oh Gad! there are the political and economic tensions that she gets drawn into, which have a fair amount to do with that tug of war between development and folk culture, progress and preservation. In my lifetime so far, and I’m still in my 30s (by my fingernails), the Caribbean has modernized at a rapid rate. The article you reference spoke to not just the nostalgia for patterns past. I’m too much a child of my time to ever want to reverse modern conveniences; but the foolhardiness of throwing out the baby with the bathwater. I have a respect for history, not just the epic ‘important’ bits, but the cultural and social history that help shape who we are. It’s a part of what I try to capture in my books from reminiscing on chasing butterflies during the summer in my first book The Boy from Willow Bend to ‘borrowing’ my mother’s pepperpot recipe for an epic pre-picnic cook-down in Oh Gad!

Oh Gad! is a book set in a fictionalized version of modern Antigua in which a woman, drawn back there by a great tragedy, tries to find a place of belonging within an Antigua in-flux. And at the centre of this is her estranged family who are about as roots as you can get, key characters in the coal pot making-slash-pottery tradition that goes all the way back to the plantation. Perhaps my father’s family’s generations’ old involvement in this old-school pottery making drew me into researching it, rendering it, celebrating it, honouring it in  the way that I do; by telling stories.

What do you hope readers will take away from the book?

Joanne: I hope they find it to be an engaging read; interesting, thought provoking and entertaining. As always, I hope Caribbean people see a bit of themselves and I hope non-Caribbean readers see some of our common humanity. Beyond that I can’t really control what they take from it as part of what we take from works of art has to do with what we bring to them. Each person will take something different.

How were you able to land a publishing deal with Strebor/Atria/Simon & Schuster, headed by publisher and New York Times bestselling author Zane?

Joanne: I’d like to believe the manuscript had something to do with it. But really all credit to my agent, with a tip of the hat to Eric Jerome Dickey who recommended her to me, who believed in the work and worked her network until she landed a publisher who believed in it too.

Correct me if I’m wrong, but I think it’s been about seven years since your last book, Dancing Nude in the Moonlight? Why did it take so long to see a new book and the first full-length novel by Joanne C. Hillhouse?

Joanne: Has it been seven years? Wow. All I can say is, the process is different for each writer, and it takes as long as it takes, especially when you don’t have the luxury of investing in the story full time.

You’ve received awards and accolades for your contributions to the literary arts in Antigua & Barbuda, including as the co-founder of the Wadadli Youth Pen Prize, a creative writing programme for young authors. Knowing the daunting challenges that writers in the Caribbean face in trying to get published and recognized, are you comfortable encouraging young people from the region to aspire to a writing career?

Joanne: Yes… and no. Let me explain. Wadadli Pen isn’t just about encouraging them to pursue a writing career, it’s about encouraging them to express themselves through the literary arts, to value the literary arts, to value their voice, to realize that they have a voice. I believe writing can be a therapeutic process. I also believe it can be a valuable, make that a necessary, skill whatever career path you choose. But if there are writers in the group who wonder am I, could I, should I, dare I, then I want to reach them as well because I didn’t have that. I still don’t know if I could recommend a writing career to someone, in the Caribbean or anywhere else, if you want to live a safe and secure and financially stable life. But if you want to write, write. Life is both too long and too short to spend it doing something you don’t want to be doing. If you want to marry that writing with something else, a law career perhaps, do your thing.

Me, I never wanted to do anything but write. I became a journalist because I wanted to write, not because I was hungry for the breaking story, though being a journalist has informed my creative writing as well, so it hasn’t been a dead end as far as circuitous routes go. Now I freelance full time doing all types of writing and editing. I’m still very much a work-in-progress, and in part because of that, and because I’ve experienced how soul-crushing and confidence-shaking that cycling of submission and rejection and criticism can be, I don’t pretend to recommend anything to anyone with any certainty. I’ve found through my own trial and error, though, that you can find creative and interesting ways to turn this thing that you love to do, writing, into something that pays you. I’ve found too that with determination you can hang  in there and keep building to the point of not just seeing your book in print but having people tell you what reading it meant to them. That said, if big money is your motivation, you might get lucky, but this probably isn’t the path for you. And I tell them that too.

How are you able to juggle your work as an author, journalist, editor, producer and your many other creative-writing pursuits with family life and your personal needs as a woman?

Joanne: Sometimes not very well at all to be honest; still trying to find the right balance.

How important is writing to you?

Joanne: It’s not just something I do. It’s part of who I am. When I can’t write, or at least read, it feels like something essential is missing. Which is why even in the midst of deadlines and all the promotional activities, I recently applied to and got accepted to a writing workshop at Brown University. I’ve got to give myself a time out from everything else and get writing again.

Joanne is scheduled to appear at Poets & Passion – A Caribbean Literary Lime on Sunday, June 17 at St Francis College, Brooklyn, New York, along with celebrated authors Lorna Goodison from Jamaica and Elizabeth Nunez from Trinidad & Tobago.

Poets & Passion – A Caribbean Literary Lime, is a monthly showcase of weekend readings and book signings featuring a mix of distinguished and emerging writers of Caribbean origin. The inaugural session was held March 23 in Brooklyn at St. Francis College. It’s a production of the Caribbean Cultural Theatre.

For more information, contact the Caribbean Cultural Theatre at (718) 783-8345 or info@caribbeantheatre.org