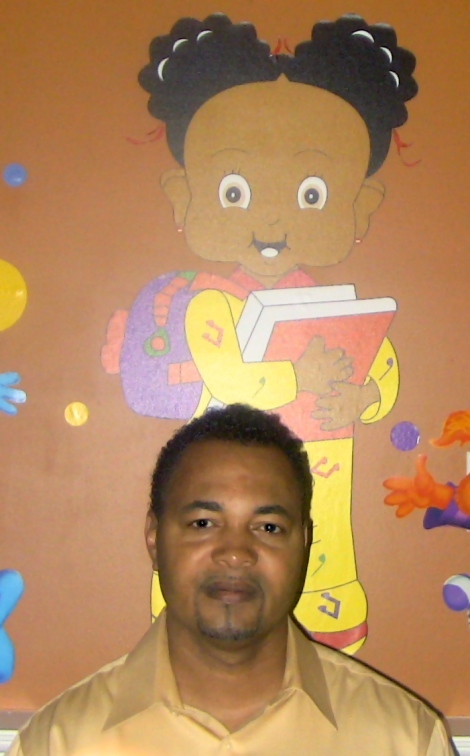 Larry Robinson is blessed with a special gift. He has the ability to tune into a child’s way of thinking and understand what excites kids and makes them tick. Originally from a small town in South Carolina, he currently lives in Charlotte, NC.

Several years ago he got an inspiration that moved him to create a new cartoon character, one that would resonate particularly with African-American children. He named her Lullaby Lettie.

Robinson believed so strongly in his dream, he used his retirement savings to create the character. He formed a company – B.A.B. Inc. – that now produces a line of products, including children’s colouring and activity books, dolls, caps and ponytail holders, all bearing Lullaby Lettie’s cute, angelic face. She talks, sings, dances and even prays. Lullaby Lettie has also gone digital. She plays online games with kids and has her own Facebook and Myspace pages. She also stars on You Tube. All indications are she’s been wowing her little fans, and judging by the following video, it seems some of them can’t get enough of her.

One thing Robinson feels strongly about is the need to find ways to preserve the innocence of children. “We believe it’s imperative that all markets that deliver products affecting the lives of children take a responsible stance for positive nurturing images. I put clothes on my character because I wanted to show our little girls that you don’t have to show your body to be respected.” says Robinson.

Like him, Lullaby Lettie is African-American. “I wanted her complexion to be the complexion I wanted it to be, and I wanted her to have Afro puffs, which, to me, is like a signature trademark of our little girls.”

Married with two daughters, and two grandchildren, Robinson recalls how difficult it was to find dolls and cartoon characters for his daughters that they could relate to from an ethnic and cultural perspective.

“I always wanted my daughters to have not just a doll but other accessories with an Afro-American character and one that can be used as a teaching tool. Usually all we have is a doll of colour and that’s it. I wanted to change that. Over the years I decided to invest my own money into the project to see if people would receive it and be able to understand why it’s needed.

“Disney tried to bring out an Afro-American character but I don’t think they put enough thought into it. I think it was just a rush job to give us something because we have an African-American in the White House with two daughters and I think they thought it would just be a hit. I sent my character and idea to Disney years ago and they said it was nice but they were not interested. At the time, I didn’t know they were working on an Afro-American character but soon found out it was the Frog Princess. The problem with Disney’s characters is that they send a message that you have to have an hourglass figure and have straight hair to be a princess.”

He added: “One unique concept about Lullaby Lettie is that she shares her culture from an African-American perspective. This is displayed in the books and movies we present to our customers. Even though she’s an African-American character, she embodies the spirit, imagination, dreams, achievements and aspirations of children everywhere. She shares those aspects with us as she explores and makes new discoveries about life.”

An ex-soldier, Robinson spent 10 years in the US Army and now works for AT&T where he’s been employed for the past 15 years. He creates his own designs in an upstairs office at his home. He sells his products online, and in bookstores. He also offers entertainment services and organizes educational performances at festivals, birthday parties, community events, churches and schools featuring Lullaby Lettie and employing flash-generated movies about varied educational subjects. His books are tailored for kids at pre and elementary school levels and contain simple puzzles, math lessons and historical facts about Black history.

Using Lullaby Lettie to teach pre-schoolers about Black history is another aspect of the character that is unique.

“I decided to include it because I believe our kids need to understand their worth at an early age so that when they start going to school and they don’t see great people of colour in their history books – or someone says you can’t do that – they can say they have already done it,” said Robinson. “On the cover of my book my character says, “Before the world tells you it’s impossible, let me show you what you have already done.” I tell parents who say their child can’t read, to read it to them and let them colour it so that they can be exposed to the facts. And usually the parents can learn something as well. The book has everything you would find in any early childhood book. I just decided to put interesting facts about people of colour.”

He added: “Everything about this character has to do with education, from the way she dresses to the way she shows respect. I want her to be a role model for our kids because it’s important for them to see someone who looks like them teaching them. I don’t think there is a lead Afro-American girl cartoon character being used as a teaching tool that has her own line of products with her likeness on them … The books I’ve produced are important because I show my character doing things such as flying a plane, scuba diving, sky diving etc; things that the media never show them doing. I’m trying to change the way they think so that at an early age they will have more options when it comes to deciding what they want to do with their lives.” 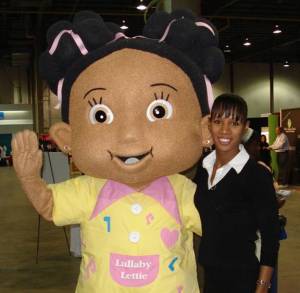 Lullaby Lettie at the Black Expo

Three years ago Robinson created a mascot to complement the books and accessories. “It’s great to have a book, but kids need to be emotionally attached to the character. They need something they can touch and feel and they can see,” he explains

So far he’s not been able to get the country’s big retail chains to stock his products. Although some of them are impressed, he says it’s hard to compete for shelf space with bestsellers like SpongeBob SquarePants and Dora the Explorer.

While he’s had some success it has been tough going and the business has had its fair share of ups and downs. Robinson says the reason for that is because it’s hard to get America’s mainstream retailers to see the need for his character.

“They only seem to want to give us characters that appeal to the hip-hop crowd, and one that’s never the lead but the friend of some other character. I have to prove to retailers that people of colour would support a character that has morals, manners and one that’s not talking slang and that can be used as a role model for our little girls. One that can also be used as an educational tool like Dora The Explorer for the Hispanics. My hope is that people who have never heard of Lullaby Lettie will take a look at what I have to offer and decide to give her a chance the next time they decide to purchase a product for their child.”

Although he faces daunting challenges, and the odds are seemingly stacked against him, Robinson still spares a thought for those in need and offers a helping hand to the less fortunate whenever he can.

“B.A.B. Inc. realizes that we should always look out for those in need regardless of how much we may or may not have. In the short time that we’ve been in business, the company has donated over $80,000 worth of merchandise to local ministries, churches, and charities.”

His faith in Lullaby Lettie is unshakeable. His big dream is for her to become a TV character and, thereby, reach a national and even international audience. “I think Lullaby Lettie can become not just an educational tool for kids, she can cross all barriers because whenever I go out, she doesn’t just appeal to Afro-American children. Hispanics buy my products. Even white people buy them.

“But most of all, I want to change the way our little girls see themselves and make them understand that they can do anything and show them options. I want people of colour to understand that if you feel left out then don’t complain – create something. I want them to do research on the person behind the product you are buying for your child and know why they are targeting your child. I want to bring some hope to a generation of kids who don’t know their rich heritage.”

Even if his investment doesn’t realise its full potential, Robinson insists it won’t stop him from bringing a smile to the little ones’ faces.

As to how he came up with the name Lullaby Lettie? “My wife’s name is Lettie. She sings in a choir. Originally, my vision for the character was that she would sing, and so I thought ‘Lullaby Lettie.’ I thought it would be a great way to honour my wife with something that could well outlive both of us.”

Listen to Robinson being interviewed on the Black Shopping Channel http://youtu.be/4mBkiaUU1oI