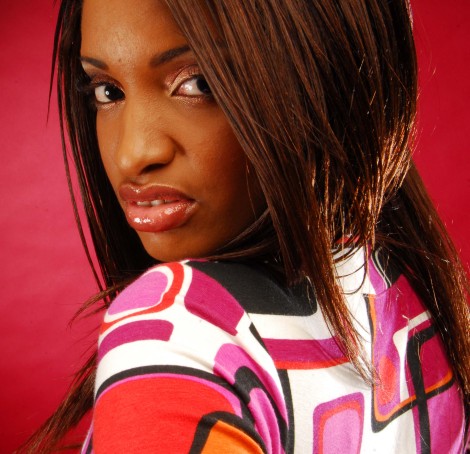 A new superhero is about to take the stage in the dynamic and fantastical world of comic books and graphic novels.

She is Googol – and she’s the brainchild of Sylvaine Francis, a Caribbean national born in Cayenne (French Guiana). I am Googol – the Great Invasion is a sci-fi graphic novel that tells the tale of a female entity who comes from the future where the use of computers, mobile phones and other 21st century communication gadgets has been replaced by a small chip placed inside the human brain. Googol’s power and her ability to accomplish her goals are not determined by her social or economic status but rather by her “brain ability.”

Coming from the future, she is a reflection of what is possible in the realm of human potential. Persons coming into contact with her have no need to guess what the future holds nor do they need to rely on religious and scientific speculations to determine what man is capable of.

“When I was thinking about my new superhero holding in her hand all these technologies and gadgets that we have today, it seemed too submissive for me and limited my attempts at creating different stories. The idea of getting rid of them and reducing them to a chip was a way to have control and awareness of everything behind them; you are in control of your data and where it goes, and you become immediately aware of who has access to them,” Sylvaine explains.

“And for those who still think about it as a scary idea, in my scenario the technology of a chip inside our brain requires a simple visit to a doctor where you receive a simple vaccine-like procedure to have the chip implanted. The core message is this; here is a world not asking us our approval to exist. It’s our future … Religion is our actuality these days. So what if someone comes from the future and humbles you into listening to what she has to say rather than being intimidated by your personal approach, interpretation and belief.” 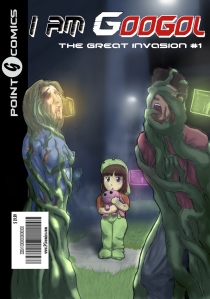 After coming up with the concept and scenario for her superhero, Sylvaine proceeded to launch her own publishing company, Point G Comics Ltd and assembled a creative team to bring her ideas to fruition. The team includes talented Brazilian artist Rodrigo de Castro who did the artwork, and Bobby Nash, a leading writer of comic books, novels, graphic novels, and short stories from Georgia, USA. Having Nash on board is a major coup for Sylvaine. He has written several titles for a variety of comic publishers including Demonslayer, Threshold, and Jungle Fantasy for Avatar Press. He is also the writer/artist of the long running comic strip Life in the Faster Lane starring R.O. 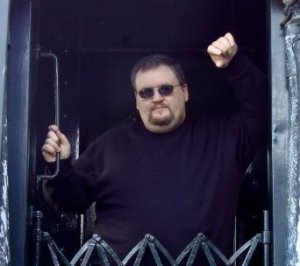 “Once you work with an experienced writer and a talented artist, you are the one – the publisher – who has it easy. I advertised the fact that I was looking for a writer for my creator-owned comic book concept. I managed to attract great candidates. I asked them how they would start my scenario and Bobby was the one who kept me interested and guessing about what happens next. So I chose him with a big smile on my face, impatient to receive his first finished script. This was more or less the whole process, apart from trying to raise funds to finance the costs of the launch. I had a pleasant time and I was very excited about how we would go about turning this complicated scenario of mine into a simple comic book and superhero material.”

Sylvaine, 32, lived in Cayenne up until 1998 when she left for Montpelier in southern France after completing her A’ Levels. There she went to university and obtained a degree in economics and business management. Subsequently, she relocated to the UK where she currently resides. Initially she landed a job as a kitchen associate in a pub in London owned by J D Wetherspoon, a chain of restaurant/pubs currently operating in almost every city and large town around the UK.

After the birth of her first child, she quit her job and became a self-employed bookkeeper. She is a member of the prestigious Institute of Certified Bookkeepers. Through it all, in her heart she yearned to create comic and graphic book characters and stories for which she long had a passion, going back to her childhood.

“The transition from accounting to comic books – the universe of cartoons and the art of original soundtracks and voice over – spoke louder to me than day-to-day realities. It’s Disney’s fault,” says Sylvaine.

“In creating this new super person, Googol, the aim of my team and I was to do something different that is a pleasure for the eyes and a wonder for the mind and magination! Something that goes deeper than just violence and sex to attract readers or viewers to our art. I wanted to create a superhero who has some answers for my own existential questions without falling into religious debate or political dialogue.” she adds.

At first glance the world of Googol seems alien to the day-to-day realities of the Caribbean where Sylvaine originated. But as she explains, the book connects with readers through its message which she encapsulates in her tagline, “I am Googol … and this is your story: the story of all beings. it can still be changed and I am there in your time to fix it.” Moreover, Sylvaine is optimistic that the storyline will appeal to readers in the Caribbean Diaspora and other regions outside of the UK, Europe and North America, including the youths.

“Due to the fact that I am from French Guiana, I guess people would expect me to refer or to sound like I am from French Guiana, with my scenarios. Their curiosity would be enough for me, because they would have to approach this new superhero as an entity above religious, political and race dimensions. The idea of GooGol is a person who does not originate in the present but has no choice but to come and achieve an important mission in our time. As a Caribbean reader you will have the satisfaction of seeing issues and problems being explored and resolved from a point of view that is not patronising and does not say let’s burn the whole place in the name of the greater good … Ask yourself the question – what if a superhero was born today in French Guiana, or tomorrow in India? How do you cope with inviting her into your plan – wherever or whoever you are? I am Googol explores these questions.”

She makes a point of distancing herself from gratuitous sex and violence in creating storylines for her books.

“I hate with a passion senseless violence and unwarranted sex scenes in movies, on TV and other mediums. I do accept that the video gamer won’t agree at all with me, but as long as these remain in video games, I don’t argue. Superhero movies tend to be dumb and dumber in my personal opinion. Just special effects and technology, no storylines you could easily relate to. As a kid, I used to be waiting patiently for that time when Clark would finally kiss Lois or Lana. Now, as an adult, I feel like I am watching a soap opera once the hero is inviting me too much into his world, his issues, his dilemma, but would not even have the courage to touch even the surface of my day-to-day adult problems.”

Indications are Sylvaine has picked a good time to try and break into the comic book market. Once confined to a small following and considered inferior to other literary forms, comic books and their counterparts, graphic novels are now a growing segment of book publishing. What’s more, graphic novels are now accepted by educators and librarians as suitable reading for kids and young adults. The graphic novel genre refers to any book that is written in a comic format that resembles a novel in length and narrative development.

In a guide to graphic novels written by Phillip Crawford, Library Director of Essex High School in Vermont, and Stephen Weiner, Director of the Maynard Public Library in Maynard, Massachusetts – two highly regarded experts in the field of graphic novels for youths, librarians and teachers – the two experts noted that graphic novels now enjoy widespread respectability.

“The notion that graphic novels are too simplistic to be regarded as serious reading is outdated. The excellent graphic novels available today are linguistically appropriate reading material demanding many of the same skills that are needed to understand traditional works of prose fiction.”

They believe the art form is great reading for kids.

“Graphic novels powerfully attract and motivate kids to read. Many librarians have built up graphic novel collections and have seen circulation figures soar. School librarians and educators have reported outstanding success getting kids to read with graphic novels, citing particularly their popularity with reluctant readers, especially boys—a group traditionally difficult to reach. At the same time, graphic novels with rich, complex plots and narrative structures can also be satisfying to advanced readers.”

Crawford and Weiner are both acclaimed authors of books and articles on graphic novels Their guide on the genre was written for the Scholastic Corporation, the world’s largest publisher and distributor of children’s books and a leader in educational technology and children’s media.

In 2006, U.S. consumers reportedly spent approximately $330 million on graphic novels and comics, with librarians accounting for about 10 percent ($33 million) of those purchases.

Every year, the US-based Young Adult Library Services Association puts out the Great Graphic Novels for Teens list,  a comprehensive look at the highest-quality graphic books to come out over the past year and a half. In 2007, the graphic novel American Born Chinese by Gene Luen Yang (Roaring Brook/First Second) won the Michael L. Printz Award for best young adult book of the year.

For the past nine years Free Comic Book Day has been celebrated annually around the world. It’s a day-long event during which thousands of comic bookshops worldwide give away select comic books to customers free. It’s held on the first Saturday of May and is designed as a family event for avid collectors, comic novices, and adults and children to enjoy.

In Japan, where the graphic novel format known as manga is all the rage, the books are hugely popular with youths and adults alike. The genre includes a broad range of subjects, including action-adventure, sports and games, romance historical drama, comedy, science fiction and fantasy, mystery, horror, sexuality, and business/commerce, among others.

Back in the West, comic book fans have found added reason to rave about the Apple iPad. According to CNN, the iPad’s size, portability and color screen makes it a good fit for reading comics.

I am Googol – the Great Invasion is the first issue of three introducing the new superhero. Not one to rest on her laurels, Syvaine is already looking ahead to the future.

“My dream is to work on different characters for GooGol in different countries – Alisha for our Indian GooGol, Aichenguo for our Chinese GooGol (see characters introduction http://www.iamgoogol.com/?page_id=596) and from there to grow towards 2D animation (clay animation) and 3D animation and then also work with a team in South Africa.”

The book is available on pre-order at the Point G Comics website http://www.PGcomics.com and will soon be on sale on Amazon.com and Play.com. Shipping starts from the November 8, 2010.